A few months ago a missionary couple from another organization brought a fellow from their area to Danja for wound care.  This patient had been dealing with these wounds for more than eight months.  He had previously also been cared for at SIM’s Galmi Hospital.  At both centres this patient and his wife had opportunities to hear pieces of the gospel.  When they returned home, the missionary there followed up with this patient and shared audio materials with him in his heart language.  This man gobbled it up and it wasn’t long before he decided to receive Jesus as his Lord and Saviour.  Soon his wife followed suite.  Then more than ten members of his family, and his best friend and his wife believed.  It can be frustrating to see how long wounds can take to heal, but when we hear such stories as these, we see that God is healing in much more important ways.
Email ThisBlogThis!Share to TwitterShare to FacebookShare to Pinterest

In Niger, there is one physiotherapy training program for the entire country (compared to five just in the province of Ontario, Canada).  Until recently, all students had to complete their practicums in government hospitals.  This meant that when our own Sama’ila (Samuel) was completing his training, he could not rejoin our team during these times of internship.  In the past two years, however, administrative staff from the school (ESPAS) came to visit Danja.  They were very impressed by our centres and how we serve very different populations than the government hospitals (in particular, those with large or chronic wounds, and those with obstetric fistulas).  Since that visit, the two institutions have been working on developing a partnership.  In February, Michelle and Sama’ila taught a 10 hour module on pelvic floor therapy for the Masters level students in Niamey.  In March-April, our therapy department hosted a total of five students from the bacherlor’s level of the same program.  It is exciting to be building into the lives of this next generation of health care professionals.
Email ThisBlogThis!Share to TwitterShare to FacebookShare to Pinterest
We are sad to share with you that Dr. Raissa Lompo's mother passed away very suddenly on Tuesday morning, October 3, 2017. Dr. Raissa left CSL Danja this morning (Wednesday) to return to Niamey to be with her family. This is particularly heart-breaking because Dr. Raissa was planning to move to Niamey next week where she would have been in the same city as her parents.
Email ThisBlogThis!Share to TwitterShare to FacebookShare to Pinterest 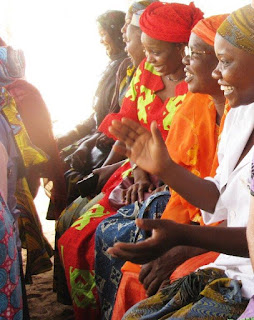 On Friday, May 12, the administrative staff of the two health centers (Danja Fistula Center and the Health and Leprosy Center) organized a party for the female employees. Steve Brown gave a short speech, reading from Proverbs 31 to show how God applauds women’s creativity and hard work, and then the fun began! 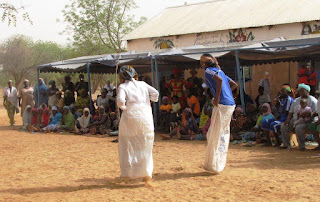 There were games, an obstacle course, sack races and foot races, but the biggest crowd pleaser was probably the fashion-show style “doing impressions” of the male staff. Women dressed up and paraded in, copying gait and mannerisms. It was up to the crowd to guess who was being imitated.

Some were difficult but others were obvious. Laughter and enjoyment were in rich supply. At the end, the organizers served bread and a delicious meat sauce to the group.

Long-Time CSL Director goes to be with the Lord 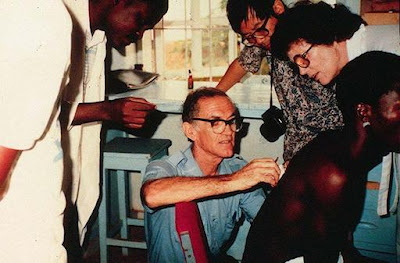 Virginia (Ginny) Fridal passed away on Thursday, April 27, 2017 in Sebring, FL at the age of 86. Ginny served 42 years in Niger from 1958 – 2000. For the first 10 years she ministered as a nurse at Galmi Hospital. From 1968 – 1999 Ginny worked with the Leprosy Hospital in Danja with short treks assisting at different stations and visiting patients – sometimes via camel! Her medical and administrative skills were highly valued. She ministered as the director/nursing officer for her last16 years on the field before retiring to Sebring Retirement Village. She loved the people and ministered to both the body and the soul.

A team of electricians came for a month!

On February 16th a team of four Romanian electricians arrived in Danja to tackle the electrical needs at CSL for a month. Two of these experienced electricians also serve as pastors in their churches in Romania. They responded to a plea made by SIM missionaries Rebeca and David Beaton for electricians. Undaunted by the language barriers and never having been to Africa, they and their churches quickly banded together to raise funds to come to Niger (and to escape the bitter Romanian winter!).  Despite initially lacking some of the materials needed to begin work, their knowledge and skill have allowed them to rewire the main fuse box in each building and to re-wire all the rooms in the main dispensary building at CSL. Until about 20 years ago CSL relied upon intermittent generator power and solar power, and before that kerosene lamps and refrigerators. Since those early days the demands placed upon the power supply have mushroomed with the availability of electric autoclaves, air conditioners and refrigerators. To get a professional result, many of the supplies have had to be ordered from Niamey, but the main problem all along has been the lack of qualified electricians.

These men are a God-send! Gradually the Romanian electrician team has tackled one problem after the next.  Rooms that were frighteningly unsafe now have grounded plugs and proper breakers. Wires arranged as masses of spaghetti are now properly organized, and loosely joined bare-wire connections are now solidly connected and safe. They were also able to determine the type and size of high-capacity distribution cable needed to meet the current needs. Unfortunately, they concluded that brown-outs and other low-voltage problems will persist until a large-capacity cable is purchased and installed. This very expensive cable needs to be purchased overseas and shipped to Niger by container. We are praying that just as the Lord provided this amazing team of electricians from Romania to serve this past month, that He will now provide the means to cover the cost of the cable and a team capable of to install it when it arrives.
Email ThisBlogThis!Share to TwitterShare to FacebookShare to Pinterest

What is a Benevolent Fund? 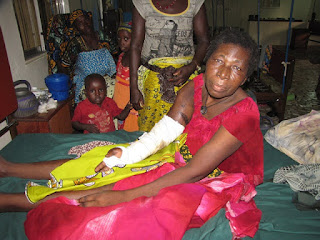 Mariama, an older widow from Nigeria, was sitting alongside the road 4 months ago and was hit by a car. The bone of her right upper arm was broken when she was struck and she received care from local traditional bone setters. The splint placed on her arm did not align her arm properly and caused a horrible infection in the lower portion of her arm below the fracture. She came to CSL Danja for treatment of that infection. The doctor would like to send her to Zinder to see an orthopedic specialist to address her improperly aligned fracture, yet Mariama is quick to point out that she gave birth to only one child in this life and that child died, so she has no means and no one to care for her. Her wound is gradually healing in response to good nursing care and better nutrition.  As a result of physical therapy at CSL she now has some ability to move the fingers on her right hand. The CSL Benevolent Fund is often called upon to assist a patient like Mariama to pay for her care. Consider making a gift to bless patients in dire need.